[Editor’s Note: Pulitzer Schmulitzer! is where we count down our favorite Pulitzer Prize winning novels for fiction according to the unpredictable and arbitrary whims of yours truly. To learn how Pulitzer Schmulitzer! started and read about the methodology or complete lack thereof behind the rankings, look no further than right here. If you want to see what we’ve covered so far, here you go. Now, on to the countdown.]

We’re about a month removed from the closing ceremonies and I’m sad the Olympics are over, but not necessarily because I want to watch more events. Honestly, it was killing my productivity. And my ability to catch up on other television shows. Or both. Hello Mr. Robot my old friend.

No, the reason I’m sad is that these Olympics will hold a special place in my heart because it was really the first Olympics that we shared with Sam and Lily. They must have watched the 2012 games in London, but at that point Sam was 11 and Lily had just turned 10 and they were still going to bed early enough that they wouldn’t have seen NBC’s ridiculously late night coverage (a topic for another day). But now they’re four years older. Sam is learning to drive, Lily is in high school and they now stay up ridiculously late which is super handy if you want to watch the Olympics.

So this year we spent a lot of time between 8 p.m. and midnight sitting around our bedroom watching Simone Biles, Kerri Walsh Jennings, and Usain Bolt. We discussed green pools, the Zika virus, and the sexism imbedded in this headline. 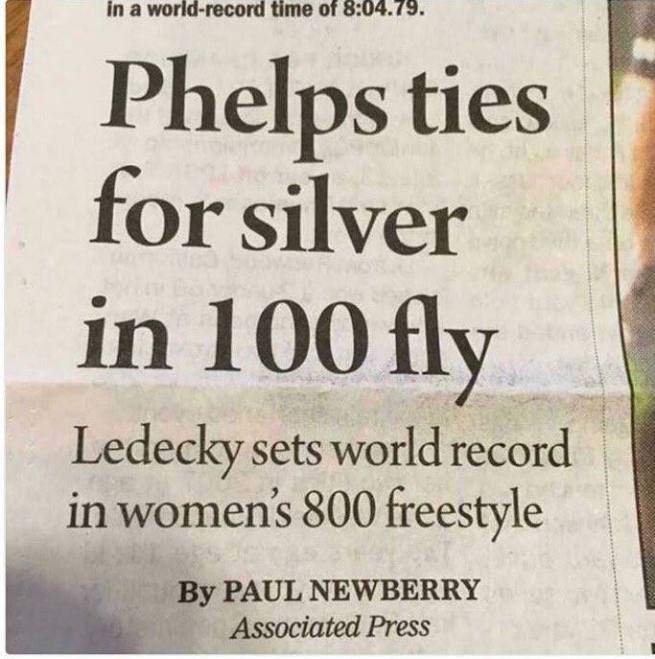 We lamented the US Women’s Nation Soccer team losing way too early. We laughed at Michael Phelps giving Chad le Clos a pre-race death stare, the diving scores that covered the athlete’s groins so it made them look like porn stars, and Ryan Lochte dying his hair brown again after saying “my bad” for lying about being held up at gunpoint. (That helped for one second.) And we marveled at the athleticism and sportsmanship on display such as Katie Ledeky beating the the silver medalist by nearly 12 seconds in the 800m final, and New Zealand’s Nikki Hamblin and Abbey D’Agostino of the USA helping each other out after colliding in their heat of the women’s 5000m. In hindsight, it was two weeks of together time that was wonderful.

And although I love that I have my nights back, I’m a little melancholy due to the fact that the Olympics only happen every four years, and that time we just spent together may not be replicated with the older two kids (Macy, I realize, is another story). When the Olympics descend on Tokyo in 2020, Sam will be nearly 20 years old and in college (hopefully). Lily will have just turned 18 and be a full-fledged adult and getting ready to go off to college (again, hopefully). Who knows if either will be in the house and even if they are, will we all sit around our bedroom for four hours every night watching synchronized diving? Doubtful.

Am I being overly pessimistic? I don’t think so. I’m dating myself, but the first Olympics I clearly remember were the 1976 Montreal Olympic Games. It was the Olympics of Nadia Comaneci and the first perfect 10. It was Sugar Ray Leonard and Spinks brothers, Michael and Leon, taking gold medals when boxing still mattered. It was the US men’s basketball team winning after the controversial loss four years earlier. It was Caitlin Jenner, then known as Bruce, winning the decathlon, soon to have (at that time) his face all over boxes of Wheaties. Germany was still divided between East and West and everyone thought the East German women’s swim team was doping when they nearly swept all the swimming events. Probably because they were.

And even now, I remember watching with my parents and loving it and being so excited for it to happen again. Except it didn’t. In 1980, the US boycotted the Moscow games for reasons I don’t recall. By the time the 1984 Olympics rolled around in LA, the Russians and most of the Eastern Bloc boycotted in retaliation for the US boycott, and I was entering my senior year of high school. As such, neither the USSR nor I participated. And then I was gone.

But, and this is a big but, having that one Olympics with my parents made a difference. Not only do I still remember much of it to this day, but it also led to one of my top five favorite Dad stories. I was so obsessed with the Olympics that when my birthday came around I wanted to have an Olympics themed party. Most of the events were fairly straightforward. Lots of races (both running and swimming), we had a roughly round-shaped rock that we used as a shot put. There was a diving (read: cannonball) competition. But my favorite event was high jump, but not because I love that event or because I did especially well. No. That event was my favorite because my Dad dragged his mattress from his master bedroom on to our front lawn so that we would have padding when we landed. And he told me not to tell my Mom.

I remember thinking it was so out of character. The whole thing. I’ve spoken at length about my Dad and he had many, many fabulous qualities, but a secretive rule breaker he wasn’t. He was very practical and honest and had I been a betting man at that tender age, I would have said there is a snowball’s chance in hell that he’d drag a mattress – his own mattress – on to our front yard in support of fake Olympic glory. And then I would have double-downed that he would have run this plan by Mom first. Being wrong about your parents, however, is just part of growing up.

And I’m 99% sure that if I could tell him that story today, he would have no recollection of ever doing that and certainly wouldn’t think that it had any impression on me. In fact, there were all sorts of other “lessons” I inadvertently learned from my Dad that I’m sure he never intended. For example, to teach my new puppy, Toby, how to swim, he threw him in the pool. Lesson learned: sink or swim. Literally. When we came across a gruesome car crash in Mexico with a bloody dead guy impaled on the steering wheel, I looked at him and he didn’t flinch. Lesson learned: don’t freak out. When my grades dipped during my sophomore year of high school, he told me not to show him my report card. Lesson learned: when the lesson is learned, the lesson is learned. (Alternate lesson: give ‘em enough rope).

Lessons learned, or scar tissue developed, during childhood is a great intro to Peter Taylor’s A Summons to Memphis, the 1987 Pulitzer Prize winner. Summons tells the story of Phillip, a New York City book editor and the 49-year-old son of imposing Memphis lawyer George Carver. Phillip, who is unmarried, returns home when George, an octogenarian, decides to remarry, a development that Phillip’s two older and also unmarried sisters, Betsy and Josephine, intend to prevent. With gusto.

But it turns out that the crux of the story isn’t the kids’ obsession with thwarting their father’s new love. Instead, it is the family’s history and the kids’ belief that their father totally ruined their lives. Unlike the father in A Thousand Acres, however, whose transgressions were objectively unforgivable, George is guilty of the much more pardonable sin of moving the family from Nashville to Memphis. In their minds, that decision 40 years earlier blighted all of their lives. Seriously, it can’t be fixed.

A little background is in order. Other than George who was born in rural Tennessee, the Carvers are natives of Nashville. And George, despite his upbringings, pulled himself up by his proverbial bootstraps, attended the prestigious Vanderbilt University and became a respected Nashville lawyer. In Nashville, the family leads an ideal life blessed with meaning until George is compelled to uproot the family and move to Memphis in order to protect his reputation due to his association with a former friend, the unsavory Mr. Lewis Shakleford. Tragedy ensues.

One sister had to give up an engagement; Philip was forever torn from an adolescent love; and the children’s mother, who has been dead for a few years before the book begins, had to leave all that she knew behind and start anew. And in Memphis the hardships continue. The teenage daughters are not allowed to be presented in Memphis and are thus denied the opportunity to find acceptable suitors; the other brother Georgie eventually runs off to fight in the war; the mother declines physically and mentally; and Philip moves to New York City to get away from it all. On the surface that is pretty much it to the story (I’ll leave you in suspense as to the success or failure of their thwarting attempts).

But really, A Summons to Memphis is about whether we ever get over the pain and betrayals – or what we remember as the pain and betrayals – from childhood. Granted, it is hard to get too worked up over the kids’ pain and betrayals in this story. It seems silly to blame a move of 200 miles as the determining factor for the rest of your life. But in retrospect, maybe the seeming triviality of the father’s actions in this book force us to take a closer look at the question. In other words, some people experience such horrible childhoods that the fact those experiences affect them throughout life seems a foregone conclusion. For most, however, those supposed wrongs might appear innocuous when viewed through the eyes of an objective outsider. In any case, A Summons to Memphis is a fine reminder that forgetting the injustices and seeming injustices which one suffered from one’s parents during childhood and youth must be the major part of any maturing process. The Carver children haven’t done so well on that front.

Bottom line, A Summons to Memphis is a finely written novel — as most of the books on the countdown from here on out will be — that tells a semi-interesting story. And for parents such as myself, it is a somewhat troubling reminder that all of your actions, intentional or not, will make an impression on your children, but a select few will change who they are as adults. And the kicker is you won’t know which actions those are until it is too late. (So maybe the really important lesson that we should teach our kids is that if you’re dropped into a swimming pool, you should swim.) All you can do is try your best, and drag your own mattress onto the front lawn once in a while. And by all means, spend time with your kids, even if it means nobody goes to bed before midnight. It might just be the thing they remember decades later. Lesson learned.